There’s no place I’d rather live than the Pacific Northwest in the summer.  It’s beautiful up here, and with the mild (and mostly dry) weather, there are many opportunities to enjoy it. 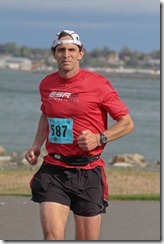 This is exactly what I was thinking when I registered for the Bellingham Bay Marathon.  It was to take place on September the 25th.  In my seventeen years of living here, that permits me exactly one week of summer weather before the curtain of fall descends, and we have a steady mist that will persist until the following July.  Perfect!

Imagine my shock when I arose on race morning to hear the steady drumming of rain outside.

The marathon is a point to point run, starting at the Lummi Nation School, on Gooseberry Point, northwest of the city.  The busses leave downtown Bellingham at O’Dark Early, bringing us out to the school.  By the time we lined up for the start, the sun has come up, and the rain had stopped.  It felt a bit warm and muggy.  However, this calm turned out to be pretty temporary.

They sent us off promptly at 7:30.  As we crested a hill leading us out to the shoreline, the wind really picked up.  It was a nice tailwind – made me feel like I was running downhill as we wound along Bellingham Bay.  Looking at my mile splits, I was a bit concerned that I was taking the early miles a bit too fast.  I’d ease off a little bit, but would click off another brisk one.  I blamed it on the tailwind, and enjoyed the nice view across the bay.

We turned inland just before hitting mile 6.  The tailwind became a crosswind, and we continued on some gentle rolling country roads, followed by a stretch on some paved trails.  I felt like I was working harder than usual, just to hold a straight line with the crosswind – I remember observing a line of runners in front of me, all leaning into the wind – almost like sailboats.  I wish I’d taken a picture.

Things got more interesting when we turned to the south, as we ran just to the west of the Nooksack River between mile 11 and 12.  The crosswind became a headwind, and the difference to my mile pace was marked.  Some of that was fatigue.  But a big part of it was the wind.  Employing my Chi Running tricks (straight column, forward lean, gliding steps) didn’t stop it from feeling like work.

By the time we merged with the half marathoners around mile 17, I was definitely feeling it.  My mile splits were slower, but still respectable enough.  We wound through neighborhoods for a couple of miles, eventually landing on a trail heading through Squalicum Creek Park.  This was a nice stretch, with clear views out over the bay.  The sun had come out too.

Whatever sense of tranquility we’d had on the trail went away shortly after mile 20 when we hit the waterfront.  The wind had picked up again.  It was about now that I saw one of the more unusual things I’ve seen during a race.  As ran past the end of a waterfront building, I saw an entire group of runners directly in front of me suddenly shift three feet to the left.  I thought they’d jumped to avoid something in the path, but as I found out seconds later – it was a gust of wind. 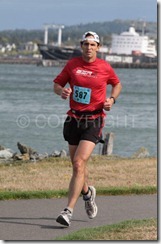 It was the same story heading through Boulevard Park, and got even worse as we ran up the Taylor Avenue dock.  As we turned to head up the ramp taking back onto the streets, I was pretty wiped out.  I’d stopped looking at my overall time, instead focusing mile by mile.  And I was surprised that my splits were still under nine minutes per mile, given how I was feeling.  I’d given up on my ‘A’ goal – under 3:35, held faint hope for 3:40, but felt good about my chances for 3:45 or better.

The last two miles had us backtrack towards downtown.  I was definitely ready to be done too.  By the time I ‘d passed the 26 mile mark, I’d slowed to a near-8:50/mile pace.  Spent, but happy with my effort, I came in at 3:42:22, my fastest in nearly two years, and third fastest ever.

I spent a long time in the finish area – eating a bunch and drinking lots of electrolytes.  I got a massage that nearly brought me to tears (apparently I was pretty tight).  And I spent some time catching up with running friends, and swapping stories about the “Mighty Wind”.

One of the things I love about distance running is the stories we earn and share.  And today was a good day – those gusts will increase in speed every time I think about this race.

Charts and Graphs for Running Geeks

You can pretty much tell where the wind changed, by looking at the splits.  Still – a good day.

This entry was posted on Sunday, September 25th, 2011 at 23:21 and tagged with marathon, marathon maniacs, running and posted in running. You can follow any responses to this entry through the RSS 2.0 feed.
« the long run : the story of matt long’s recovery
watershed »

3 responses to “a windy autumn day on bellingham bay”